Submerged..submerged in a beautiful daylight spread across Athens or Ionia or Crete. That embraced white colour of the 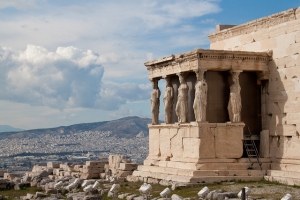 culture is all over my being. People are still savages in the historical sense. They are in the middle of a pure civilized cultural transformation. Expressions are pure, expressions are new. Everyone is exploring the difference and trying to make the sense of it in the new horizons that are open to them. It is for them to give the human society a direction they like. Look at Sparta, look at their social experiment. Ruthless but so liberating in the approach. No one is there yet to judge them in any aspect. Nothing is taboo. Every good intention is allowed to express shamelessly in the way it would like. Let it be savagery, let it be tyranny, let it be anarchy. So beautiful are these initial days, the initial days of history, the initial days of human 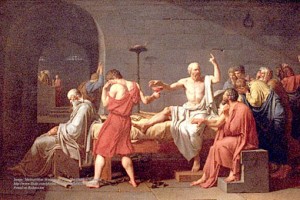 so called civilization. Passion is riding along in the veins of bright
minds. Look at that Parthenon! It is there still giving us the taste of the experiment and freedom of the pure mind. It is so beautifully white ! it is so beautifully at the centre of everything. Just imagine the statue of Athena in the place of worship. Imagine the place in a bleeding moonlight. People had uncorrupt sense of beauty. There are no categories in their minds about the thoughts, topics , beauties they come across. They are just riding across everything saying anything they want. A mathematician this moment is stating something about Zeus the next moment. An atomist who is talking like a mystic the next moment. A mystic is pointing out a scientific physical fact the next moment. An artist is making a statement about art of war with the confidence of a general. A philosopher is dreaming of a top position in politics. Everything is connected for them. The vigor, fearlessness and innocence with which every subject is being tackled is the magic of that time. The wholeness of life, world and being is still maintained. Though some people dream of some kind of rigid order it is still an idea somewhere and somewhere it has been applied and being implemented for centuries but it is like an experiment in a lab. The next war can ruin it and establish something new. Every extremity was acknowledged. In my opinion the times were so artistically painted with all these varied endeavors that actually poets, dramatists or musicians can capture the essence with the guidance of Greek poets and artists with much more confidence of capturing it to the precision.

This may seem a worthless romanticizing, idealizing of those times. Anyone can argue that reality was much more different than this. But I would still like to stick to the argument that the direction in which human history moved, Pre-Socratic, Hellenic, Hellenistic times were the souls of it. They are the foundations on which the temple of human Endeavour is built! Let the white light of Orphic, Pythagorean, Socratic and numerous individual brilliance shine on me! Let my imaginative mind get showered with the shameless impulsive genius!

I have few things in my mind....This is an effort to try n express those things properly n boldly through words....want to explore the power of expression ! View all posts by eklachalo